Recently, Autism Speaks announced a change in its mission statement.  They have removed the word “cure” while keeping words like “interventions”, “solutions” and talk about research into the causes of autism, which still implies that they have not distanced themselves completely from eugenics and “prevention” of autism.

Autism Speaks claims to want to increase “understanding and acceptance” after over a decade of working against those very things.  This is not the language or intentions of autism acceptance. While this has been portrayed as a move forward, we at Boycott Autism Speaks are more than skeptical.

What do #actuallyautistic people think?

“They haven’t apologized to autistics specifically or generally.

Therefore, they are still flagrant trash.” 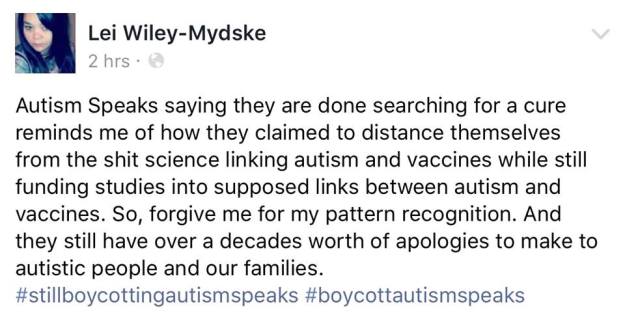 “Autism Speaks saying they are done searching for a cure reminds me of how they claimed to distance themselves from the shit science linking autism and vaccines while still funding studies into supposed links between autism and vaccines. So, forgive me for my pattern recognition. And they still have over a decades worth of apologies to make to autistic people and our families.#stillboycottingautismspeaks #boycottautismspeaks” 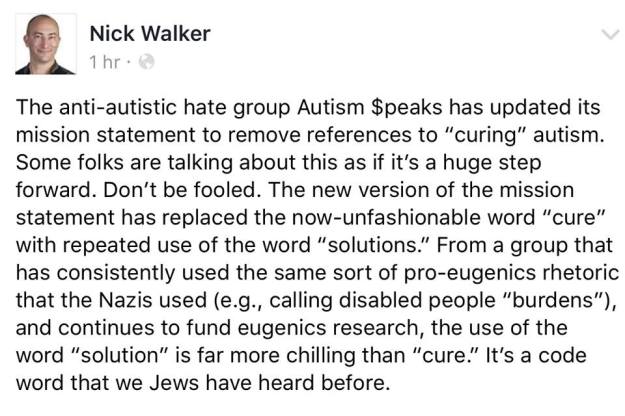 “The anti-autistic hate group Autism $peaks has updated its mission statement to remove references to “curing” autism. Some folks are talking about this as if it’s a huge step forward. Don’t be fooled. The new version of the mission statement has replaced the now-unfashionable word “cure” with repeated use of the word “solutions.” From a group that has consistently used the same sort of pro-eugenics rhetoric that the Nazis used (e.g., calling disabled people “burdens”), and continues to fund eugenics research, the use of the word “solution” is far more chilling than “cure.” It’s a code word that we Jews have heard before.” 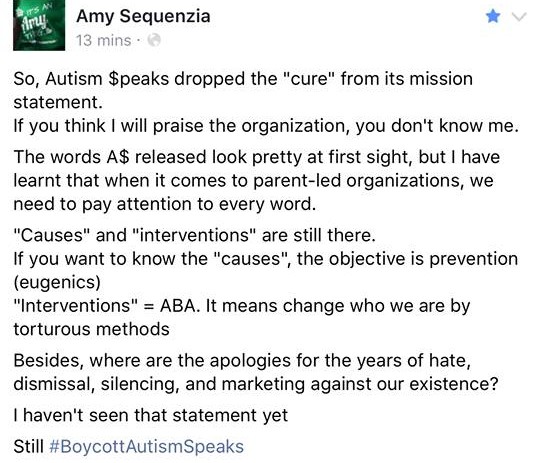 “So, Autism $peaks dropped the “cure” from its mission statement.

If you think I will praise the organization, you don’t know me.

The words A$ released look pretty at first sight, but I have learnt that when it comes to parent-led organizations, we need to pay attention to every word.

“Causes” and “interventions” are still there.

If you want to know the “causes”, the objective is prevention (eugenics)

“Interventions” = ABA. It means change who we are by torturous methods

Besides, where are the apologies for the years of hate, dismissal, silencing, and marketing against our existence?

I haven’t seen that statement yet

Autistic adult Corina Becker reacted to the change on their blog, No Stereotypes Here:

“You want to change? Show us you can actually change.  Until then, we’re not falling for your superficial gloss over, your charade.  You’re not actually supporting us, you’re not actually listening to us, and until there is fundamental changes, you never will.”